On Tuesday (12 July), the Royal Air Force Red Arrows paid a visit to Clachan, West Kintyre, when its pilots performed a fly-past to honour a comrade who lost his life 23 years ago.
The elite aerobatic team’s visit coincided with the final stage of a Remembrance project carried out by local primary school pupils and led by the former local Church of Scotland minister. 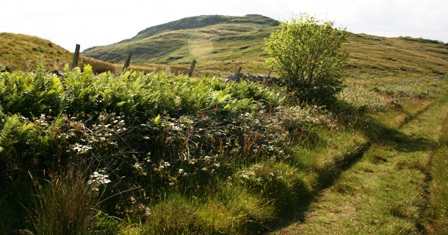 At breakfast time on Tuesday morning, around 100 people of all ages  –  some local residents, others friends or visitors  –  made their way to the edge of the village and trekked up first a farm road and then sheep tracks to the summit of the hill at Dunskeig. 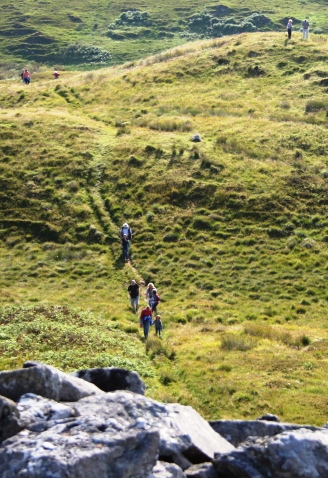 Local people make their way to the summit of Dunskeig Hill

Encircling the hilltop are the remains of what is believed to be an Iron Age fort, and within it stands a memorial cairn, erected in memory of Flight Lieutenant Neil Duncan MacLachlan who died when his aircraft crashed during Red Arrows training at RAF Scampton in January 1988.  The cairn is believed to have been raised by friends of Neil who were fellow pilots.
At a respectful distance from the cairn, Clachan Youth Club members and helpers set a small campfire and prepared breakfast for those who were beginning to gather at the summit.
The Red Arrows had specified to the minute their anticipated arrival time, and, as many of the walkers absorbed the stunning views of the Sounds of Jura and Gigha, and of West Loch Tarbert, there was much checking of watches and scanning of the sky to the south-west.
As the minutes ticked by, the crowd gravitated to the flattish ground between the Ordnance Survey trig point and Neil MacLachlan’s cairn.

In foreground, the cairn erected in memory of Flt Lt Neil Duncan MacLachlan

At precisely 9.14 am, a horizontal line of nine slender shapes, silhouetted against the bright blue of the morning sky, appeared from the direction of Rhunahaorine Point.
As the tight group approached Dunskeig, the distinctive red paintwork of each Hawk aircraft became visible.  With half a mile to go, the pilots activated the Red Arrows’ trademark smoke trails.  For this poignant occasion, no red or blue dye was used  –  just a billowing trail of white vapour behind each jet.
Holding a perfect V formation, and with white nose lights blazing, the nine planes roared overhead.  It sounds ostentatious, but in reality it wasn’t.  It was very simple, very respectful, and very moving.

Each of the aircraft involved was flown by a fast jet pilot drawn from the RAF’s frontline squadrons.  As Red Arrows pilots, their current business is high-speed aerobatics.  Pilots such as these love their work, are conscious of how quickly things can go wrong, and accept the risks involved.  In paying tribute to one of their own, they were as discreet as it’s possible to be in a machine which is nearly 12 metres long and capable of 900 miles per hour.
As the aircraft passed overhead, some in the crowd waved.  All watched intently as the formation, flying onwards up West Loch Tarbert, maintained the impression of flying as one.  The team’s motto  –  Éclat (brilliance)  –  never seemed more appropriate. 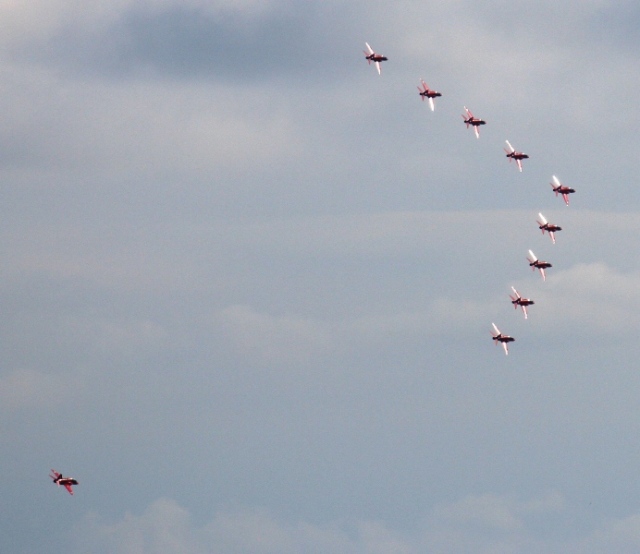 The formation banks as one, as Red 10 prepares to rejoin for the onward flight to Prestwick

Eventually, the entire formation banked slowly to the right.  The nine scarlet jets turned towards the peaks of Arran, as a singleton  –  the reserve aircraft, flown by Red 10, the team’s Road Manager  –  re-joined the main group for its onward passage to Prestwick and re-fuelling.  Thereafter, the Red Arrows would fly to Greenock, where they were scheduled to display at The Tall Ships Race.
Afterwards, we spoke to the Reverend Martin Grashoff, who, until March this year, was the parish minister for the West of Kintyre.  Having spent two very happy years in Kintyre, he followed his intuition and applied successfully for what is at first sight a very different post, that of chaplain to the UK oil & gas industry, based in Aberdeen.

During his time in Kintyre, Martin was the school chaplain for the primary schools at Clachan, Rhunahaorine, and Glenbarr.
He explains: “For the three schools, for the last session, I took, as a theme, Remembrance.  We had a lesson about the war memorials, which can be seen in the villages.
“We had a lesson also about a Bible story, about how remembrance works, with stones that remind you of something, and we had planned to continue all that, but then I left for Aberdeen; so it didn’t happen”.
Martin described how, despite his departure for Aberdeen, an opportunity arose subsequently to illustrate the last part of the Remembrance theme, thereby completing his project with the West Kintyre children.  He continued: “Because here, on Dunskeig, we have a monument built by friends of Neil MacLachlan, the Red Arrows pilot who crashed in 1988.  And remembering someone can be climbing a hill and standing there.
“I just applied for a fly-past, and at first it seemed it wasn’t going to happen.  But (the Red Arrows) contacted me personally and said “We really want to do this“, so I was really chuffed with seeing ten Red Arrows here.  I would have been very happy with five of them  –  sometimes they do small formations  –  but it was all nine, with (Red) 10 on the wing.  I’m really pleased.
“Neil MacLachlan was connected to the Clachan area because his family used to  –  and still does  –  come on holiday to the area just at the foot of Dunskeig.  And they are there now”. 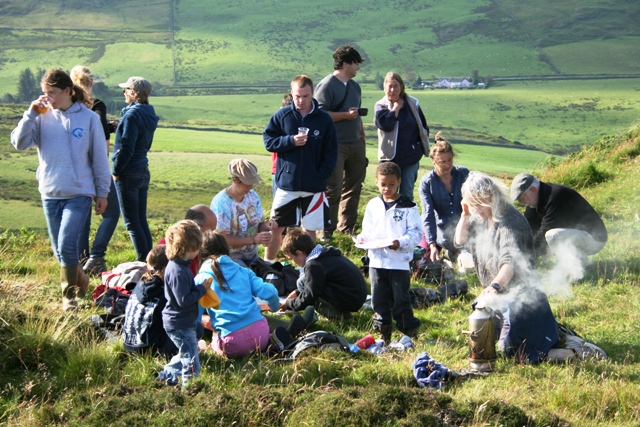 Martin feels that, despite the tragic circumstances which brought the Red Arrows to Clachan, Tuesday’s event could be seen also as a celebration of community.  He welcomed the fact that the occasion had brought together at Dunskeig a wide range of local people.
He feels also that the event highlighted the importance of a school within a community, citing the fact that although, with the arrival of the summer holidays, the occasion was no longer a school activity, the same people turned out as would have had the fly-past taken place during term time.  They simply renamed it a community event. 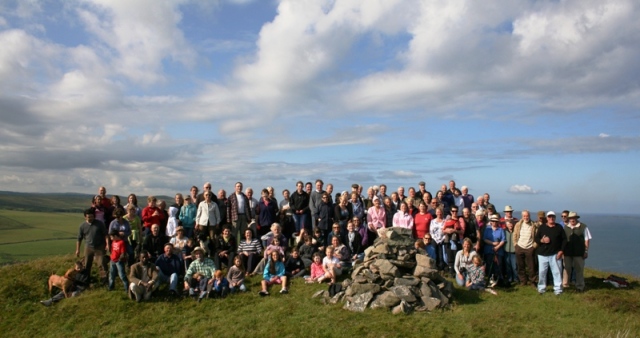 He added: “The school and the local community are so interwoven and connected that what happens in the school is for the village, and what happens in the village will include the school.  And that’s how local communities work.  It’s very important”.
He regrets that, owing to the holidays, it proved impossible to involve the pupils at Rhunahaorine and Glenbarr, but he pointed out: “There are some people, from all the way down south on the west side, who have come today  –  some older people  –  and who have climbed this hill”.
We understand that Neil’s mother was present during the fly-past, and that she was able to watch from the shore at Dunskeig.
We understand also that, over and above the MacLachlan family’s holiday connection with Clachan, Neil’s forebears actually farmed at Dunskeig.

Neil Duncan MacLachlan is buried in Binbrook (St Mary) Churchyard, Lincolnshire, where his grave is marked by a military headstone.  Prior to transferring to the Red Arrows in October 1987, he flew Lightning jet fighters.

At the time of his death, Neil was married, with a two week-old child.

The story of one fitting tribute to Neil, by a former comrade, is told here.

Set into Neil’s memorial cairn at Dunskeig is a simple bronze plaque, inscribed as follows:-