A83 DRIVER HAS NARROW ESCAPE

This afternoon (6 February), the occupants of a private car escaped serious injury when their vehicle struck a garden wall, rebounded, and overturned, on the A83, Barmore Road, Tarbert. 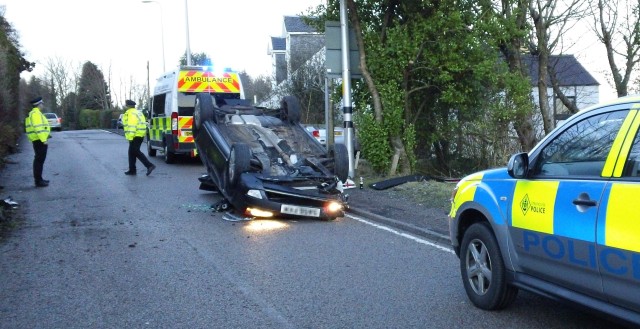 The Ford saloon car was extensively damaged, and, despite the best efforts of police in attendance, caused disruption to traffic pending its removal by recovery contractors.

It is understood that no other vehicle was involved in the collision. 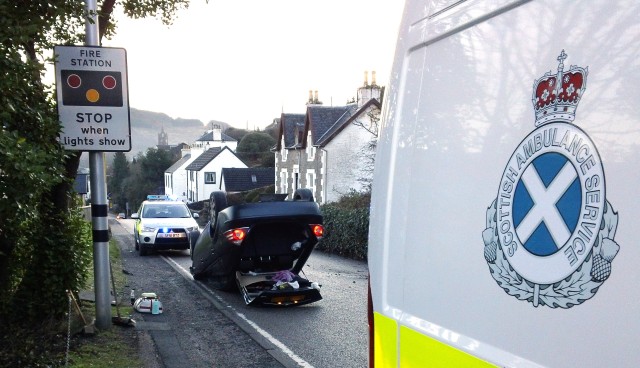 Emergency services were on the scene within minutes

The crash occurred only three days before representatives of Scotland’s national transport agency are due to attend a public meeting of Tarbert & Skipness Community Council (TSCC) in connection with concerns about the A83 route.  TSCC has circulated posters encouraging members of the community to attend and have their say in relation to safety issues involving the condition and design of the trunk road.

Today’s accident happened at one of the areas highlighted on the posters, namely the “pinch point at Barmore Road”, where narrowing of the roadway makes it difficult for goods vehicles, meeting and passing, to avoid mounting the pavement.

It is anticipated that, at this Thursday’s meeting  –  due to take place at Tarbert’s Templar Arts & Leisure Centre  –  Transport Scotland’s National Network Manager David Hamilton and the agency’s Road Safety Manager George Henry will also hear road users’ concerns as to the frequency of landslides at the Rest & Be Thankful, and the agency’s contingency planning for dealing with such incidents.